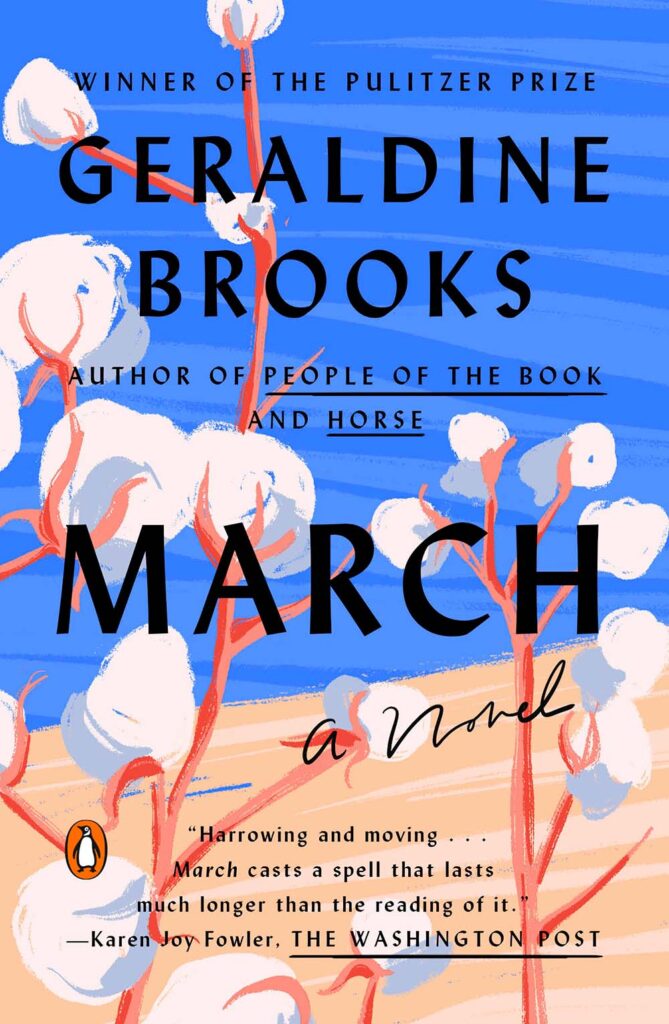 In your afterword, you make an amusing apology to your husband, a well-known writer and Civil War afficionado, for your previous lack of appreciation for his passion. Although you say you’re not sure “when or where” it happened, would you talk a bit about your change of heart and what led to your new and profound interest in the American Civil War and eventually to the writing of March?

In the early 1990s we came to live in a small Virginia village where Civil War history is all around us. There are bullet scars on the bricks of the Baptist church where a skirmish took place; we have a Union soldier’s belt buckle that was unearthed near the old well in our courtyard. The village was Quaker, and abolitionist, but in the midst of the Confederacy. The war brought huge issues of conscience for the townsfolk, a few of whom sacrificed their nonviolent principles to raise a regiment to fight on the Union side. It was thinking about the people who once lived in our house, and the moral challenges the war presented for them, that kindled my interest in imagining an idealist adrift in that war. I am gripped by the stories of individuals from the generation Oliver Wendell Holmes so eloquently described when he said: “In our youth our hearts were touched with fire.” I’m still not all that interested in the order of battles, I still drive Tony crazy by failing to keep the chronology straight, and offered the choice between a trip to the dentist and another midsummer reenactment, it’d be a hard call. But sometimes, alone on a battlefield as the mists rise over the grass, I feel like a time traveler, born back by the ghosts of all those vivid, missing boys.

Grace Clement is such an extraordinary character and is pivotal in shaping March’s life. You tell us that her voice was inspired by an 1861 autobiography, but what inspired you to create a romantic relationship between Grace and March? Were there any historical hints that Alcott had had such a relationship?

The idea of an attraction between March and Grace is entirely imagined and not at all suggested by Bronson Alcott’s biography. It grew naturally out of the narrative: they are young and attractive when they first meet, he is an idealist, she is a compelling person in a dramatic and moving situation. It seemed inevitable to me.

A year after March enlists he says, “One day I hope to go back. To my wife, to my girls, but also to the man of moral certainty that I was . . . that innocent man, who knew with such clear confidence exactly what it was that he was meant to do.” Do you think he can go back? Is it even possible? Would you discuss how you think March changes by the end of the novel and what parts of him remain intact?

I don’t think he can go back. Nor do I think it is necessarily desirable. Moral certainty can deafen people to any truth other than their own. By the end of the book, March is damaged, but he is still an idealist; it’s just that he sees more clearly the cost of his ideals, and understands that he is not the only one who must pay for them.

Your book Nine Parts of Desire deals with the issues of Muslim women. Year of Wonders had a female heroine, Anna Frith. How was it different writing principally from a man’s point of view this time?

I have always believed that the human heart is the human heart, no matter what century we live in, what country we inhabit, or what gender we happen to be. This is a book about strong feelings: love and fear. I can’t believe there’s much difference in how a man or a woman experiences them. And then, I had the journals and letters of Bronson Alcott, which are perhaps as complete a record of a Victorian man’s interior life as any you could find.

It is quite a surprise to suddenly hear Marmee’s voice in Part Two. Can you talk about how and why you decided to change the point of view here?

The structure of March was laid down for me before the first line was written, because my character has to exist within Louisa May Alcott’s Little Women plotline. That meant March has to go to the hospital gravely ill and Marmee has to arrive to tend him. The alternative to switching voices would have been to continue the narrative in March’s voice, disoriented by his delirium. But giving Marmee a voice seemed like an opportunity to me to better explore some of the themes of communication, and miscommunication, in a marriage. Also, the book was written against the tumult of my own feelings about the war with Iraq, and as I started to write in Marmee’s voice I found that she could naturally articulate a frustration, grief, and confusion that seemed in common between us.

The American Civil War was enormously complex with different political, social, economic, and psychological factors all playing a role. What did you learn from your research that may have surprised you and, other than your obvious newfound interest, is your opinion of the war any different now than when you started?

Nations inevitably fall into the trap of romanticizing their militaries and are always astonished when the truth of awful atrocities is revealed, as it inevitably is in almost every war. There were plenty of hate-filled racists in Lincoln’s army, fighting side by side with the celebrated idealists. March’s growing dismay as he learns this in a way reflects my own journey to a more complete understanding.

Would you talk a bit about how your past work as a foreign correspondent informs your current writing? What do you think historical fiction can achieve that nonfiction cannot? Would you ever entertain the idea of writing a novel about current events?

Write what you know. It’s the first advice given to writers. I did draw on some experiences of war from my correspondent years. You see things during war, and you can never unsee them. The thing that most attracts me to historical fiction is taking the factual record as far as it is known, using that as scaffolding, and then letting imagination build the structure that fills in those things we can never find out for sure. And to do that you use all the experiences you can. While I love to read contemporary fiction, I’m not drawn to writing it. Perhaps it’s because the former journalist in me is too inhibited by the press of reality; when I think about writing of my own time I always think about nonfiction narratives. Or perhaps it’s just that I find the present too confounding.

What are you working on now?

Another historical novel based on a true story, but one where the truth is not completely known, and so there are intriguing voids for the imagination to fill. Like March andYear of Wonders it has a lot to do with faith and catastrophe.