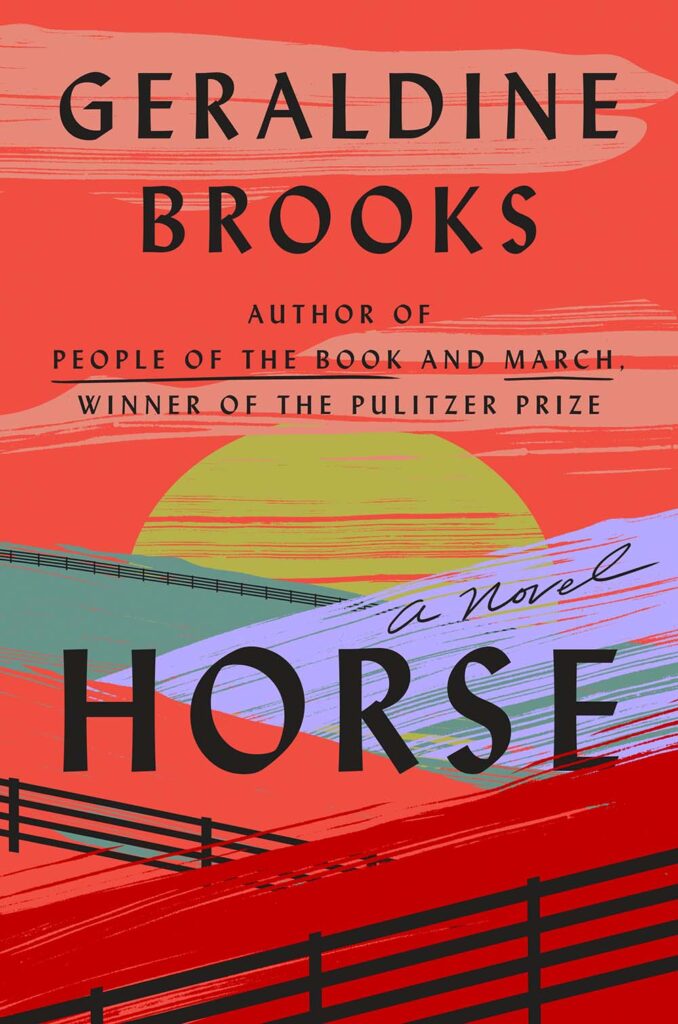 HORSE is based on a real-life racehorse named Lexington, one of the most famous thoroughbreds in American history. How did you learn about him?

I had just published my novel, Caleb’s Crossing, which was partially researched at Plimoth Plantation, and the curators there had invited me to a lunch, at which they suggested I might want to write a novel based on a young woman from the early Plimoth settlement.  It was clear to me that this would be too close to the character I’d already created in Caleb’s Crossing but from across the table I began to catch snatches of a different conversation.  An executive from the Smithsonian was describing how he had just overseen delivery of Lexington’s skeleton from Washington DC to the International Museum of the Horse in Kentucky, where it would be the centerpiece on the history of thoroughbred racing in the US.  As he related the horse’s extraordinary life story, I became fascinated, and by the time he got to the horse’s fate in the Civil War, I knew that my next book wouldn’t be about a settler in Plimoth, but about this horse.

When Lexington died, the horse was so beloved he was given a ceremonial burial, complete with a horse-sized coffin.  Later, it was suggested that his skeleton be disinterred and gifted to the Smithsonian.  It stood in pride of place there for many years.  But as the horse’s fame waned and the museum’s emphasis switched from displaying curiosities to advancing scientific knowledge, Lexington’s individual story became less important, until the skeleton stood in the Hall of Osteology along with those of other species, simply an example of “equus caballus”, or “Horse.”  Eventually it was relegated to the attic of the natural History Museum and all but forgotten.

It’s clear in the novel how central horseracing was in the 1850s, a passion as much in the North as the South, among Black Americans as White Americans. Why do you think it was so popular?

Before the Civil War and the Jim Crow era that followed Reconstruction, the racetrack was an integrated space, where all classes and colors mingled.  Horseracing was the popular pastime of the 1800s, with crowds of twenty thousand or more packing racetracks to watch famous rivals such as Eclipse and Fashion, Grey Eagle and Wagner, and thousands of fans following the outcome in the lively turf press of the day.  Of New York’s three main newspapers of the era, two were devoted entirely to horseracing. America was an agrarian culture; even most townsfolk were only a generation removed from the land. Races happened everywhere. Andrew Jackson raced his horse in the streets of Washington DC; many towns hosted quarter mile sprints on their Main Streets, and farmers of modest means dreamed of breeding the next champion. Meanwhile, the wealthy built racetracks on their plantations and saw in their thoroughbreds a reflection of their own prestige.

What is known about the enslaved people whose skills the racing business was built on? What sources did you have, and how much was left to the imagination?

Horseracing relied on the plundered labor of highly skilled Black trainers, jockeys and grooms.  Their centrality is evident in the surviving correspondence of elite White horse breeders, who counted on the expertise of these men. These letters, as well as reporting in the turf press, reveal deference to the knowledge and skill of trainers such as Hark, Ansel Williamson and Charles Stewart and jockeys such as Abe Hawkins and Cato. These were great professionals who, within a brutal system, wrested a degree of personal agency not available to most enslaved people, including acquiring property and traveling widely throughout the country. Unfortunately, most of what we know of them is distorted through a White lens:  Charles Stewart, for example, related his life story to a White woman and while the account is rich in detail, it is likely that he self-censored aspects that reflected badly on her forebears.

The central story involves Jarrett, an enslaved boy, and Lexington, the racehorse he raises and trains. What inspired his character and his story?

There are detailed accounts of a lost painting by the artist Thomas J. Scott  (who is also an important character in the novel) depicting Lexington “being led by black Jarret, his groom”  while the horse was at Woodburn Stud, which was perhaps the preeminent livestock breeding operation in America at the time.  I was unable to find any biographical detail on Jarret, so I created his character based on records I could find about two highly accomplished Black horsemen who, though enslaved, were in charge of Woodburn’s thoroughbred operations: the trainer Ansel Williamson and the jockey and trainer Edward D. Brown.

The novel features a nearly contemporary storyline, set right before the pandemic, and an interracial relationship at the heart of it. As a historical novelist, why did you choose to write in the present day?

Just as my novel People of the Book has a contemporary thread in dialogue with its historical core, I wanted this novel to take us into the modern laboratories at the Smithsonian where bones are studied and artworks are evaluated. As I researched the historical spine of the novel it became clear to me that the story I’d thought would be about a racehorse was also a story about race, and as White supremacists rioted in Charlottesville and George Floyd died under the knee of a White police officer, I knew I could not deal with racism in the past and not address its loud and tragic echoes in the present.

You made another discovery related to the horse while you were researching at the Smithsonian, but this one was about art, not science.

Yes. One of the best surviving portraits of Lexington, painted by Thomas Scott, was given to the Smithsonian in a bequest from the pioneering gallerist, Martha Jackson. She was a friend of Pollock and DeKooning and a champion of avant garde art in 1950s New York City.  It’s the only traditional, representational painting in her bequest–very different from the art she loved and collected. The mystery of why that painting might have mattered to Martha brings the novel into the turbulent, bohemian, post-war art world at the birth of abstract expressionism.

Who are the famous horses who descend from Lexington?

Ulysses S. Grant’s favorite horse, Cincinnati; the horse Preakness after whom the stakes race is named and two other Preakness winners; nine of the first fifteen Travers Stakes winners,; Asteroid, who was undefeated; Kentucky, who is in the US Racing Hall of Fame. Lexington sired 236 winners at a time when racing was disrupted by the Civil War and many thoroughbreds were requisitioned as warhorses. He appears in the bloodlines of many of the greatest racehorses even today.

You dedicate the novel to your late husband, the writer Tony Horwitz, and write in your Afterword that you traveled together to Kentucky, where your research often intersected in intriguing ways. Would you describe some of those intersections?

Tony was researching the travels of Frederick Law Olmsted just before the Civil War.  Olmsted was interested in the views of the emancipationist Cassius Clay, who also happened to be the son-in-law of Lexington’s breeder, so we traveled together to Clay’s estate, White Hall. Tony also knew his way around the rich archival sources in Kentucky and was able to help me unearth a Civil War journal by the chaplain of Thomas Scott’s unit, which contained a detailed memoir of the two men’s relationship, forged in field hospitals caring for the wounded.

You ride horses and thank your horse Valentine and her companion who “were daily inspirations.” When did you begin riding?

Late!   I was in my 50s when I took my first riding lesson, a time when knitting lessons might perhaps have been a more prudent choice. I’m still not a very good rider, but there’s so much more to horses. They’re exquisitely sensitive animals who can teach us a lot about ourselves, about group dynamics, and about leadership.  Valentine and I have volunteered in a therapeutic riding program for children with autism and sometimes the relationship between child and horse verges on the miraculous. That’s why it’s tragic that so many racehorses are used up and destroyed before they’re five.  My horse is twenty-six and she still has so much to give.