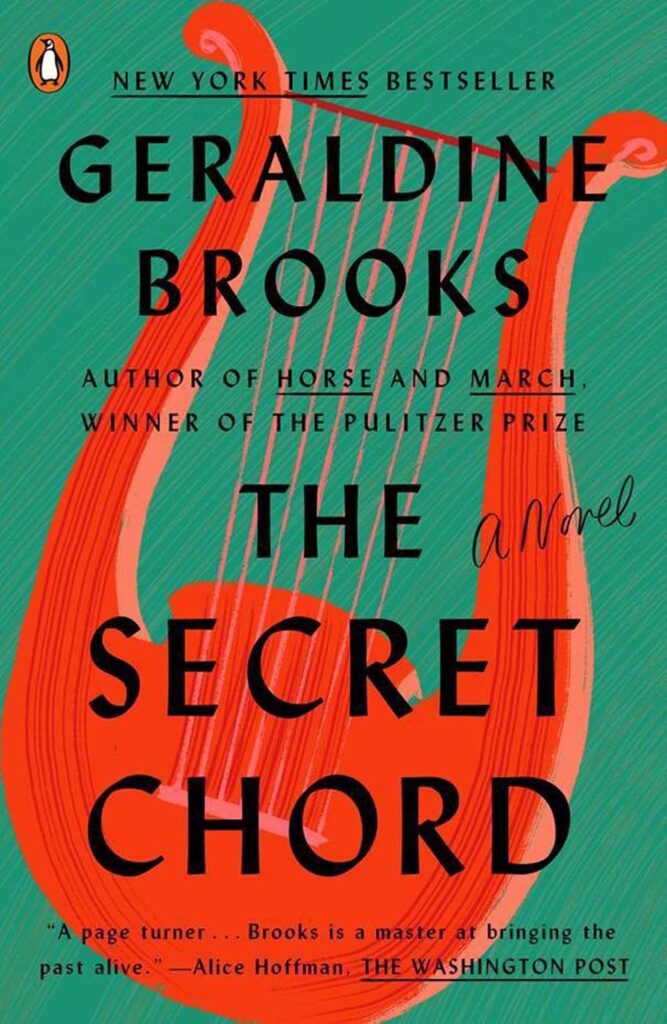 A rich and utterly absorbing novel about the life of King David, from the Pulitzer Prize–winning author of People of the Book and March

With more than two million copies of her novels sold, New York Times bestselling author Geraldine Brooks has achieved both popular and critical acclaim. Now, Brooks takes on one of literature’s richest and most enigmatic figures: a man who shimmers between history and legend. Peeling away the myth to bring David to life in Second Iron Age Israel, Brooks traces the arc of his journey from obscurity to fame, from shepherd to soldier, from hero to traitor, from beloved king to murderous despot and into his remorseful and diminished dotage.

The Secret Chord provides new context for some of the best-known episodes of David’s life while also focusing on others, even more remarkable and emotionally intense,  that have been neglected.  We see David through the eyes of those who love him or fear him—from the prophet Natan, voice of his conscience, to his wives Mikal, Avigail, and Batsheva, and finally to Solomon, the late-born son who redeems his Lear-like old age. Brooks has an uncanny ability to hear and transform characters from history, and this beautifully written, unvarnished saga of faith, desire, family, ambition, betrayal, and power will enthrall her many fans.

“In her gorgeously written novel of ambition, courage, retribution, and triumph, Brooks imagines the life and character of King David…The language, clear and precise throughout, turns soaringly poetic when
describing music or the glory of David’s city…the novel feels simultaneously ancient, accessible, and timeless.” –Booklist-starred review

“What Mary Renault did with Alexander the Great, Geraldine Brooks has done with King David: breathed life into an ancient hero. Haunting, exciting and as satisfying in structure as a completed Rubik’s Cube.” — Tom Holland

“Brooks evokes times and place with keenly drawn detail. . .with the verve of an adroit storyteller. . .Ambitious and psychologically astute.”  — Publisher’s Weekly

“Brooks continues to explore the meaning of faith and religion in ordinary life. . .she skillfully retells David’s story through the eyes of Natan. . .Of just as much interest as Brooks’ view of the politically astute lion in winter are her portraits of characters who are somewhat thinly fleshed in their biblical accounts, such as Batsheva, Yoav, Avner, even Avshalom.  A skillful reimaging gracefully and intelligently told.” – Kirkus Reviews