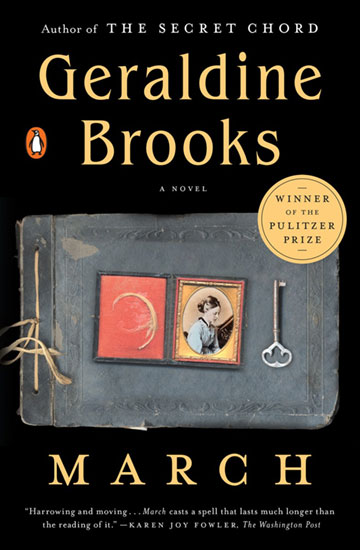 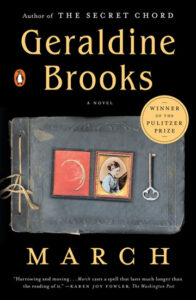 With her critically acclaimed and bestselling novel Year of Wonders, Geraldine Brooks was praised for her passionate rendering and careful research in vividly imagining the effects of the bubonic plague on a small English village in the seventeenth century. Now, Brooks turns her talents to exploring the devastation and moral complexities of the Civil War through her brilliantly imagined tale of Mr. March, the absent father from Louisa May Alcott’s Little Women. In Mr. March, Brooks has created a conflicted and deeply sensitive man, a father who is struggling to reconcile duty to his fellow man with duty to his family against the backdrop of one of the most grim periods in American history.

October 21, 1861. March, an army chaplain, has just survived a brush with death as his unit crossed the Potomac and experienced the small but terrible battle of Ball’s Bluff. But when he sits down to write his daily missive to his beloved wife, Marmee, he does not talk of the death and destruction around him, but of clouds “emboss[ing] the sky,” his longing for home, and how he misses his four beautiful daughters. “I never promised I would write the truth,” he admits, if only to himself.

When he first enlisted, March was an idealistic man. He knew, above all else, that fighting this war for the Union cause was right and just. But he had not expected he would begin a journey through hell on earth, where the lines between right and wrong, good and evil, were too often blurred.

For now, however, he has no choice but to press on. He is directed to a makeshift hospital, an old estate he finds strangely familiar. It was here, more than twenty years earlier, that he first met Grace, a beautiful, literate slave. She was the woman who provided his first kiss and who changed the course of his life.

Now, he finds himself back at the Clement estate, and what was once the most beautiful place he had ever seen has been transformed by the ugliness of war. However, March’s sojourn there is brief and he finds himself reassigned to set up a school on one of the liberated plantations, Oak Landing—a disastrous posting that leaves him all but dead.

Though rescued and delivered to a Washington hospital where his physical health improves, March is a broken man, haunted by all he has witnessed and “a conscience ablaze with guilt” over the many people he feels he has failed. And when it is time for him to leave he finds he does not want to return home. He turns to Grace, whom he has encountered once again, for guidance. “None of us is without sin,” she tells him. “Go home, Mr. March.” So, March returns to his wife and daughters, and though he is tormented by the past and worried for his country’s future, the present, at least, is certain: he is home, he is a father again, and for now, that will be enough.

1) Throughout the novel, March and Marmee, although devoted to one another, seem to misunderstand each other quite a bit and often do not tell each other the complete truth. Discuss examples of where this happens and how things may have turned out differently, for better or worse, had they been completely honest. Are there times when it is best not to tell our loved ones the truth?

2) The causes of the American Civil War were multiple and overlapping. What was your opinion of the war when you first came to the novel, and has it changed at all since reading March?

3) March’s relationships with both Marmee and Grace are pivotal in his life. Discuss the differences between these two relationships and how they help to shape March, his worldview, and his future. What other people and events were pivotal in shaping March’s beliefs?

4) Do you think it was the right decision for March to have supported, financially or morally, the northern abolitionist John Brown? Brown’s tactics were controversial, but did the ends justify the means?

5) “If war can ever be said to be just, then this war is so; it is action for a moral cause, with the most rigorous of intellectual underpinnings. And yet everywhere I turn, I see injustice done in the waging of it,” says March (p. 65). Do you think that March still believes the war is just by the end of the novel? Why or why not?

6) What is your opinion of March’s enlisting? Should he have stayed home with his family? How do we decide when to put our principles ahead of our personal obligations?

7) When Marmee is speaking of her husband’s enlisting in the army, she makes a very eloquent statement: “A sacrifice such as his is called noble by the world. But the world will not help me put back together what war has broken apart” (p. 210). Do her words have resonance in today’s world? How are the people who fight our wars today perceived? Do you think we pay enough attention to the families of those in the military? Have our opinions been influenced at all by the inclusion of women in the military?

8) The war raged on for several years after March’s return home. How do you imagine he spent those remaining years of the war? How do you think his relationship with Marmee changed? How might it have stayed the same?